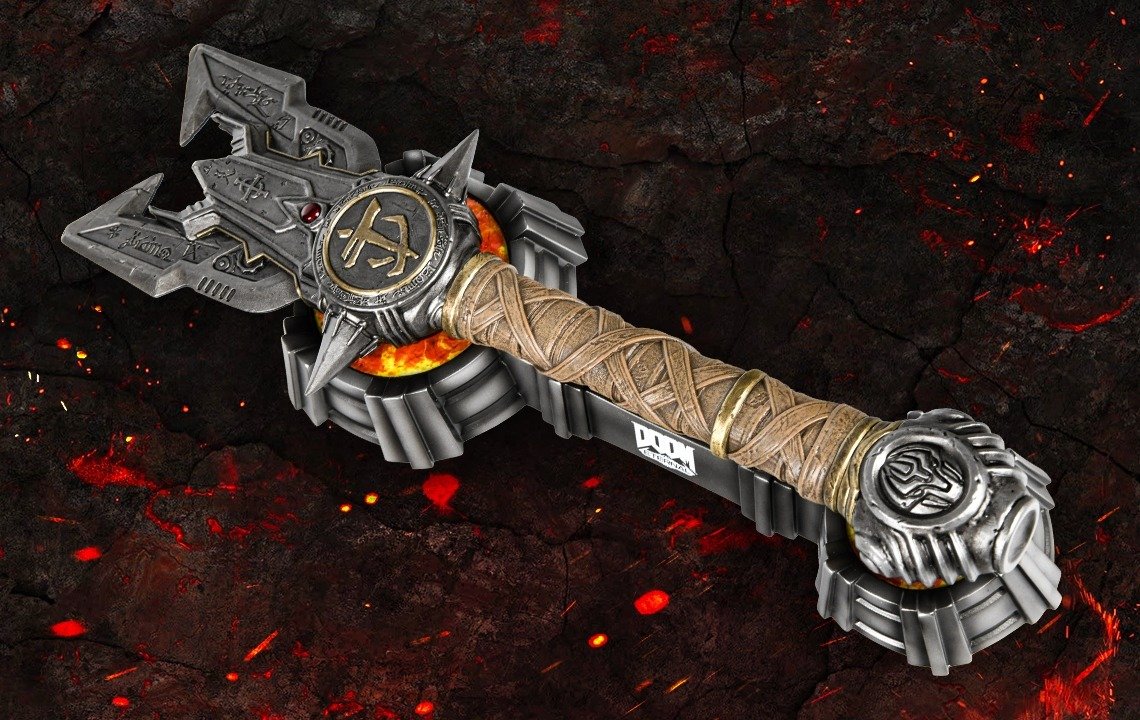 While the DOOM Slayer has been dominating the armies of Hell with bullets and plasma, firepower isn’t the player’s only weapon against demonic hordes. The Bethesda Gear Store is proud to present the DOOM Eternal Crucible Hilt Replica, a highly-detailed collectible that brings to life one of DOOM Eternal’s lore-rich superweapons. It’s a limited edition of only 900 pieces worldwide. Each retails at $135 USD and comes with an individual number and a Certificate of Authenticity. You can pre-order yours from August 17, 2022. They are expected to ship during the month of October 2022.
GET THE QUICK FACTS LAUNCH DETAILS
Launch Date: August 17, 2022
Product Name: DOOM Eternal Crucible Hilt Replica Product Page
Retail: $135 USD
Estimated Ship Date: October 2022
TAKE A CLOSER LOOK
Wield the sword that forged the legend of the DOOM Slayer—or at least what’s left of it after you broke it off the body of its latest prey. The Bethesda Gear Store is proud to present the DOOM Eternal Crucible Hilt Replica. It brings to life a superweapon that the game describes as “one of the most mysterious artifacts known to man”.
Immensely powerful, a Crucible, powered by Argent Energy, is capable of slaying most demons with a single blow. This one in particular belongs to the DOOM Slayer. It is depicted in its inactive state, just as it was when the player first recovers it in DOOM Eternal. During that part of the story, the Slayer leaves the blade embedded in the chest of a massive Titan in Taras Nabad. This move will permanently neutralize the Titan, and leave the Slayer only the hilt with its cross guards folded shut.
Sculpted and painted in great detail, this 12-inch long collectible has all the beautiful features of its in-game counterpart. Embossed on the pommel, shoulder, and cross guards are a number of Hellish insignia including the Mark of the Slayer.
When not in your hands, the DOOM Eternal Crucible Hilt Replica can rest on its base, which resembles the red hot forge that the Slayer uses to create a new blade.
There are only 900 pieces of this limited edition collectible, each retailing at $135 USD and coming with an individual number and a Certificate of Authenticity.  Related LinksDOOM Gear CollectionBethesda Gear Store Statues & ReplicasBethesda Gear Store Collectibles

Fans have been looking forward to DOOM Eternal’s 4K ray tracing gameplay since NVIDIA demonstrated how stunning it would look and how well it would perform with the new GeForce RTX 3080 Ti graphics card. Because of this, NVIDIA is teaming up with the Bethesda Gear Store ...